On Wednesday afternoon after the 5 hour drive, Don Kawahigashi and I arrived at the convention site, Columbia Lakes Resort, which is located 60 miles south of Houston. We checked in at the convention headquarters and ran into Jim Schottenham of New York and Dwight McKenna of Michigan, who clued us in on the fantastic fishing to be had right outside of our cottage door. Sure enough, 6-7 lb. bass were swimming around in the lagoons that meander throughout the resort. I eventually landed only a couple of small ones. Harvey Musselman of Washington and Don hooked into and lost several big ones but Harvey later landed one about 5 lbs. on an SOS topwater lure as the sun set. 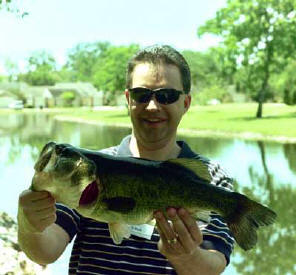 Thursday started off at 5:30 am with the hotel serving up all of the antique tackle fishing tournament participants a couple of tasty breakfast burritos and coffee. Eager to hook some big bass on antique rods and lures, we set out for the lake that was just down the road. Fishing was on the upturn after a severe cold front. Fish were measured and released and Harvey Musselman again showed his skill by coming in with the most fish. ORCA VP Bill Muth won big fish award with his 21″ largemouth. Bill is shown to the right with a similar fish caught from the lagoon that evening.

Thursday’s activities continued with Colby Sorrels, Nello Armstrong and Alan Barraco doing a great job with the Texas fishing history and Langley seminar very informative and entertaining. At the members and spouses dinner meeting, outgoing Reel News editor Phil White received an honorary plaque for his outstanding service and elevating the Reel News into the premier publication on antique reels. The day ended with another night of room trading and fishing the lagoons.

Friday morning started off with a lively breakfast with the board. Business was taken care of and announcements were made about next year’s National to be held at Lake George, New York. I had a few minutes to deliver a note of thanks and a gift to Phil on behalf of a bunch of his cyberfriends that frequent the Reel Talk message board and his websites. He was very surprised about the notes and gift. 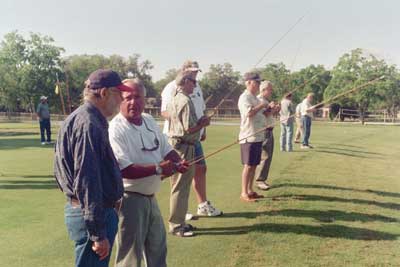 After breakfast, Lou McEachern, the man who cast a sinker clear over the roof of the Houston Astrodome, got things rolling with an eye popping demonstration of his longcasting technique. He went through an array of various casts with different rod and reel combinations, which also included a broomstick. He made a cast from his knees that went farther than anything I could do standing. The cast he did with his tournament rod and reel, traveled 700+ feet, even though he wasn’t really pumped as he would be in a competition.

Big Lou’s demonstration was followed by the ORCA Old Tackle Casting Contest. The adjacent photo shows some of the casters warming up. This years over all winner was Warren Platt, who also won the non-level winding event. Brent Wagaman topped the level wind field. 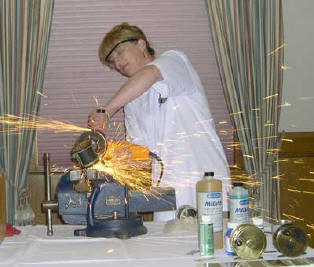 The Texas BBQ lunch that followed was hearty and tasty. This year’s Annual Stu Lawson Reel Toss had only four competitors but new member, Big Lou, went home with the perpetual trophy and reels (or parts). Then it was off to another excellent seminar by Nello and Lorraine Lawrence on reel cleaning and preservation. Their seminar started with Lorraine waking everyone up by hitting a power grinder against a bolt which was vice clamped behind a Pflueger reel (gasp!). Sparks went flying everywhere as you can see from the photo. After dinner members set up for the show. I learned a bit about how to keep one eye on stuff being unloaded so you can snap things up while you’re setting up.

Saturday started with the anticipation of seeing new stuff that everyone had hidden away during room trading. The floor seemed lively and most table holders I talked to commented that they did pretty well selling stuff. Saw lots of others walking around with reels in their hands so I’m sure everyone found something to show off back home. Even my new recruits, Don and Big Lou went home with an old reel or two, three. The auction saw a fellow walk in with several hundred reels, including a couple of Vom Hofe bay reels. 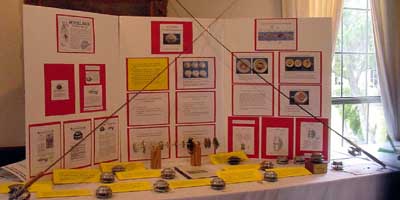 John Gland and Bill Land put together a stunning display detailing the variety of Meisselbach automatic reels and how they work, shown left, to take the top prize in the reel display contest at the National convention. The other display winners were Warren Platt with his glass-cased Talbot display, which showed the diversity of items made by the Talbot company, and Jim Schottenham’s excellent history of the Follett reel which included proof that a patent existed for the Follett, although it might never have made it to the patent office.

I attended my first ORCA Convention last year in Fife, Washington and have to say, as much fun as it was last year, I had an even better time this year. Of course the fishing was good and there were simply tons of reels to be ogled at, but everyone there made it an event to remember. Thank you to our hosts, Tom Eidson, Jay Herbert, Bryce Tawny, Lorraine Lawrence, Colby Sorrells, Nello Armstrong, and Steve Riggins. Also a very big Mahalo! to the host spouses, Big Lou and everyone that I’ve left out but who helped make this such a great event. And lastly, to all you other members that I got to see again or meet for the first time, it was something I’ll never forget. If I’m lucky, I’ll see you all in NY next year!

Please consider a donation to ORCA. Your donation allows us to continue our mission of preserving and expanding the knowledge of old reels through the collection and distribution of historical and technical data.